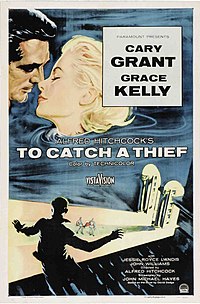 To Catch a Thief is a 1955 American romantic thriller film directed by Alfred Hitchcock, from a screenplay by John Michael Hayes based on the 1952 novel of the same name by David Dodge. The film stars Cary Grant as a retired cat burglar who has to save his reformed reputation by catching an impostor preying on the wealthy tourists (including the daughter of a wealthy widow, played by Grace Kelly) of the French Riviera.

Retired jewel thief John "The Cat" Robie is suspected by the police in a string of burglaries on the French Riviera. When they come to his hilltop villa to question him, he slips their grasp and heads to a restaurant owned by his friend Bertani. The restaurant's staff are members of Robie's old gang, who have been paroled for their work in the French Resistance during World War II. They are angry at Robie because they are all under suspicion as long as the new Cat is active. When the police arrive at the restaurant looking for Robie, Foussard's daughter spirits him to safety; Danielle is a young woman who fancies him dearly.