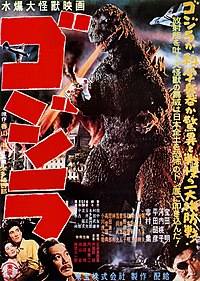 is a 1954 Japanese kaiju film directed by Ishirō Honda, with special effects by Eiji Tsuburaya. Produced and distributed by Toho Studios, it is the first film in the Godzilla franchise and the Shōwa era. The film stars Akira Takarada, Momoko Kōchi, Akihiko Hirata, and Takashi Shimura, with Haruo Nakajima and Katsumi Tezuka as Godzilla. In the film, Japan's authorities deal with the sudden appearance of a giant monster, whose attacks trigger fears of nuclear holocaust during post-war Japan.

When the Japanese freighter Eiko-maru is destroyed near Odo Island, another ship – the Bingo-maru – is sent to investigate, only to meet the same fate with few survivors. A fishing boat from Odo is also destroyed, with one survivor. Fishing catches mysteriously drop to zero, blamed by an elder on the ancient sea creature known as "Godzilla". Reporters arrive on Odo Island to further investigate. A villager tells one of the reporters that something in the sea is ruining the fishing. That evening, a storm strikes the island, destroying the reporters' helicopter, and Godzilla, briefly seen, destroys 17 homes and kills nine people and 20 of the villagers' livestock.