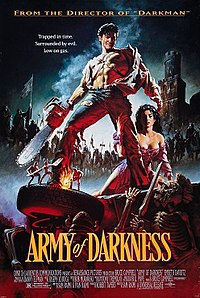 Army of Darkness (titled onscreen as Bruce Campbell vs. Army of Darkness and marketed as such on some home releases) is a 1992 American comedy horror film directed, co-written and co-edited by Sam Raimi, co-produced by Robert Tapert and Bruce Campbell and co-written by Ivan Raimi. Starring Campbell and Embeth Davidtz, it is the third installment in the Evil Dead franchise, and a sequel to Evil Dead II, and follows Ash Williams (Campbell) as he is trapped in the Middle Ages and battles the undead in his quest to return to the present.

Having been accidentally transported to the Middle Ages, Ash Williams is captured by Lord Arthur's men, who suspect him of being an agent for Duke Henry, with whom Arthur is at war. He is enslaved along with the captured Henry, his shotgun and chainsaw are confiscated, and he is taken to a castle. Ash is thrown in a pit where he kills a Deadite and regains his weapons from Arthur's Wise Man. After demanding that Henry and his men be set free, as he knew it was a witch hunt, and killing a Deadite publicly, Ash is celebrated as a hero. He grows attracted to Sheila, the sister of one of Arthur's fallen knights.