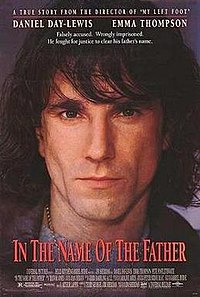 In the Name of the Father is a 1993 biographical crime drama film co-written and directed by Jim Sheridan. It is based on the true story of the Guildford Four, four people falsely convicted of the 1974 Guildford pub bombings which killed four off-duty British soldiers and a civilian. The screenplay was adapted by Terry George and Jim Sheridan from the 1990 autobiography Proved Innocent: The Story of Gerry Conlon of the Guildford Four by Gerry Conlon.

In Belfast, Gerry Conlon is mistaken for an IRA sniper by British security forces and pursued until a riot breaks out. Gerry is sent to London by his father Giuseppe to dissuade an IRA reprisal against him.