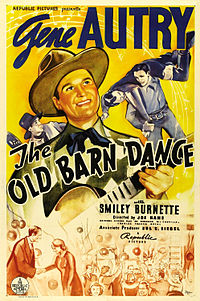 The Old Barn Dance is a 1938 American Western film directed by Joseph Kane and starring Gene Autry, Smiley Burnette, and Joan Valerie. Written by Bernard McConville and Charles F. Royal, the film is about a cowboy and his buddies whose horse selling business is threatened by a tractor company that claims horses are out of date.

A horse trader named Gene Autry (Gene Autry) arrives in Grainville with his horses and outfit prepared to put on a barn dance to attract potential horse buyers to an auction. The horse trading business has been affected lately by the increased use of tractors to replace horses for farm work. Radio station owner Sally Dawson (Joan Valerie) approaches Gene and offers him a contract to sing on a program sponsored by Thornton Farming Equipment, the area's leading manufacturer of tractors. Unconvinced that tractors could ever replace horses, Gene refuses her offer, but is still attracted to her and invites her to his barn dance that night.