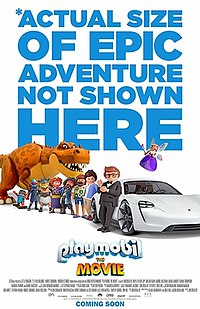 Playmobil: The Movie is a 2019 English-language French computer-animated musical adventure comedy film based on the German building toy Playmobil. The film is directed and conceived by Disney veteran Lino DiSalvo, in his directorial debut, written by Blaise Hemingway, Greg Erb and Jason Oremland, and produced by On Animation Studios. The film stars the voices of Anya Taylor-Joy, Jim Gaffigan, Gabriel Bateman, Adam Lambert, Kenan Thompson, Meghan Trainor and Daniel Radcliffe. The film follows a girl named Marla who tries to save her brother from a Playmobil world the two are sucked into, and becomes involved in the midst of a population-capturing scheme by Emperor Maximus.

Marla is a formerly free-spirited girl who has grown up to be responsible yet overprotective in order to care for her brother Charlie, who has grown lonely and disconnected from her after the death of their parents. One night, Charlie sneaks out to visit a toy museum with a Playmobil exhibit. After Marla arrives and scolds Charlie for running away, a lighthouse illuminates them and transports them to the Playmobil world.