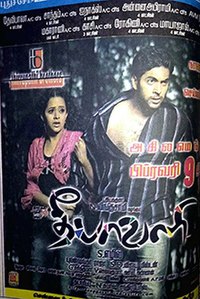 Deepavali is a 2007 Indian Tamil-language action romance film written and directed by Ezhil and produced by Thirupathi Brothers, the Tamil film production company owned by brothers N. Subash Chandrabose and noted director, N. Lingusamy and was founded in 2006. Starring Jayam Ravi and Bhavana in lead and Raghuvaran, Lal, and Vijayakumar in supporting roles. The shooting of the film finished in December 2006, with shooting locations were canned in India and in Oman, for the picturization of a song. The film released worldwide on 9 February 2007 and was considered as a successful movie with its unique entertaining features.

Billu (Jayam Ravi) is the son of Mudaliar (Vijayakumar). Mudaliar is much loved and respected by people of his locality, and Billu is almost like a foster son to every person in the locality.