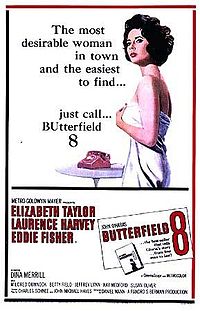 BUtterfield 8 is a 1960 American drama film directed by Daniel Mann, starring Elizabeth Taylor and Laurence Harvey. Taylor won her first Academy Award for her performance in a leading role. The film was based on a 1935 novel of the same name by John O'Hara, following the success of his critically acclaimed Appointment in Samarra.

Gloria Wandrous wakes up in the apartment of wealthy executive Weston Liggett, and finds that he has left her $250. Insulted, she finds her dress was torn, and takes Liggett's wife Emily's mink coat to cover herself, scrawling "No Sale" in lipstick on the mirror. She orders her telephone answering service, BUtterfield&nbsp;8, to put Liggett through if he calls.