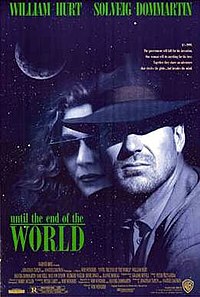 Until the End of the World (; ) is a 1991 science fiction drama film by German film director Wim Wenders. Set at the turn of the millennium in the shadow of a world-changing catastrophe, the film stars William Hurt and Solveig Dommartin, following their characters as they are pursued across the globe, in a plot involving a device to record memories.

In late 1999, an orbiting Indian nuclear satellite is out of control and predicted to re-enter the atmosphere, threatening unknown populated areas of the Earth. Mass populations trying to flee the likely impact sites cause a worldwide panic. Caught in a traffic jam and suffering from boredom, Claire Tourneur escapes the highway congestion by taking a side road. When she gets into a car crash with a pair of bank robbers, they enlist her to carry their stolen cash to Paris. Along the way, she meets a man who introduces himself as Trevor McPhee, and allows him to travel to Paris with her. He is being followed by an armed man named Burt who is working for some people whom Trevor has robbed. After reaching the house of her estranged lover, Eugene, Claire discovers that Trevor has stolen some of the money.