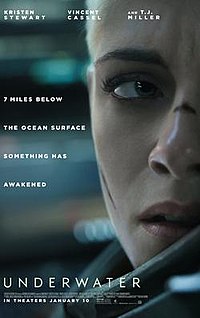 Underwater is a 2020 American science fiction action horror film directed by William Eubank, screenplay by Brian Duffield and Adam Cozad and story by Duffield. The film is produced by Chernin Entertainment and stars Kristen Stewart, Vincent Cassel, Jessica Henwick, John Gallagher Jr., Mamoudou Athie, and T.J. Miller. It follows a group of workers on a drilling facility at the bottom of the ocean who encounter hostile creatures after an earthquake destroys the facility.

Kepler 822, a research and drilling facility operated by Tian Industries at the bottom of the Mariana Trench, is struck by a strong earthquake. As part of the facility is destroyed by the quake, mechanical engineer Norah Price and her colleagues, Rodrigo and Paul, make their way to the escape pod bay. However, the three discover that all of the escape pods have already been deployed, with Captain Lucien being the only person in the area when the three arrive. Together they reach a control base and find biologist Emily Haversham and engineer Liam Smith, who are unsuccessful in their attempts to make contact with the surface. Lucien suggests using pressurized suits to walk one mile across the ocean floor to Roebuck 641 in the hope of resurfacing from there. As they descend in a freight elevator, Rodrigo’s defective helmet implodes under the water pressure. The surviving crew see a distress beacon from one of the escape pods below, and Smith and Paul go to investigate. As they arrive at the location, they find a body in the rubble. A creature emerges from the corpse's back and attacks. Smith kills the creature and takes it inside. Haversham examines the creature and realizes that it belongs to a previously undiscovered species.