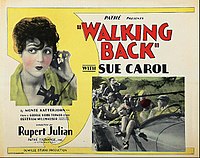 Walking Back is a 1928 American silent drama film directed by Rupert Julian and an uncredited Cecil B. DeMille. Prints of the film exist.

A young jazz hound, "Smoke" Thatcher (Richard Walling), is failing his academic studies due to his fondness for partying and liquor. His foremost concern is to convince his pragmatic father (Robert Edeson) to allow him to use the family car so he can accompany bob-haired flapper Patsy Schuyler (Sue Carol) to a ritzy party.