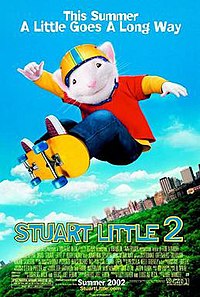 Stuart Little 2 is a 2002 American CGI animated/live-action family film directed by Rob Minkoff and starring Geena Davis, Hugh Laurie, and Jonathan Lipnicki, and the voices of Michael J. Fox as Stuart Little and Nathan Lane as Snowbell the cat. Although a sequel to the 1999 film Stuart Little, the plot bears more resemblance to the original novel by E.B. White, in which Stuart and Snowbell must save a canary named Margalo (voiced by Melanie Griffith) from an evil falcon (voiced by James Woods).

Three years after the events of the first film, Stuart Little questions his abilities following a disastrous soccer match alongside his adoptive older brother George, who accidentally kicked Stuart with a soccer ball. Stuart's relationship with George is strained further after Stuart accidentally crashes a model airplane he and George were creating in the house. Stuart's adoptive father, Frederick, tries to encourage him, telling him that "every cloud has a silver lining."