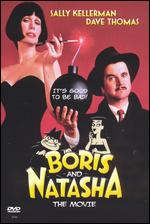 Boris and Natasha: The Movie is a 1992 American made-for-television comedy film that was loosely based on the animated television series The Rocky and Bullwinkle Show. It was shot in Los Angeles. The main actors, Dave Thomas and Sally Kellerman, did not attempt to copy the accents of their animated characters. Although Rocky and Bullwinkle do not appear in this film, two minor characters are revealed to be known also as "Agents Moose and Squirrel" during a climactic scene. This was due to the production company's inability to secure the rights to the animated characters' likenesses for this film. Originally intended for a theatrical release, this film was produced by Management Company Entertainment Group for Showtime Networks, and aired on Showtime on April 17, 1992.

The movie opens in the tiny country of Pottsylvania, located between the countries Wrestlemania and Yoursovania, where Fearless Leader concocts a plan to obtain a time-reversal microchip, invented by Professor Anton Paulovitch. He asks his top agent, Agent X (whose face is obscured), to do the assignment, but Agent X suggests they send some patsies to find Paulovitch. Boris Badenov and Natasha Fatale accept their assignment to find the Professor, and are told to defect to America. After a number of failed attempts to get there (resulting in Fearless Leader having to save them many times), they make it to America, where they are sent to the CIA. The head of the CIA, Sheldon Kaufman, decides to have tests run on them to see if they are truly defecting. After the test, it's obvious to everyone that they should be deported, but a worker, Willie, points out they hadn't had any defections in a while, and thinks they should play along and, in the meantime, spy on them to see what they are after.