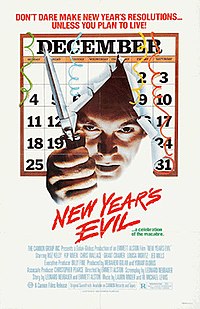 New Year's Evil is a 1980 American slasher film written and directed by Emmett Alston, co-written by Leonard Neubauer, and starring Kip Niven, Roz Kelly, and Chris Wallace. The plot follows a Los Angeles punk rock and new wave show host who receives a series of phone calls during a televised New Year's Eve bash from a killer warning of impending murders that he plans to exact as the New Year dawns on each time zone.

As the film begins New Year's Eve is on its way and television's most famous punk rock lady icon, Diane Sullivan (or "Blaze" as her fans call her), is holding a late-night countdown celebration of music and partying, televised live from a Hollywood hotel. All is going well until Diane receives a phone call from an odd-sounding stranger claiming his name is Evil, who announces on live television that when the clock strikes midnight in each time zone, a "Naughty Girl" will be "punished" (murdered), then the killer signs off with a threat claiming that Diane will be the last Naughty Girl to be punished.