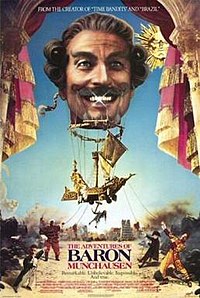 The Adventures of Baron Munchausen 1988

The Adventures of Baron Munchausen is a 1988 adventure fantasy film co-written and directed by Terry Gilliam, and starring John Neville, Sarah Polley, Eric Idle, Jonathan Pryce, Oliver Reed, Robin Williams and Uma Thurman. An international co-production between the United Kingdom, the United States and Germany, the film is based on the tall tales about the 18th-century German nobleman Baron Munchausen and his wartime exploits against the Ottoman Empire.

In an unnamed war-torn European city in the "Age of Reason", amid explosions and gunfire from a large Ottoman army outside the city gates, a fanciful touring stage production of Baron Munchausen's life and adventures is taking place. In a theatre box, the mayor, "The Right Ordinary Horatio Jackson", reinforces the city's commitment to reason by ordering the execution of a soldier who had just accomplished a near-superhuman feat of bravery, claiming that his bravery is demoralizing to other soldiers and citizens.