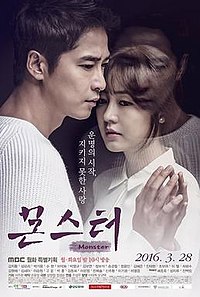 Monster is a 2016 South Korean television series starring Kang Ji-hwan, Sung Yu-ri, Park Ki-woong and Claudia Kim. It replaced Glamorous Temptation and airs on MBC on Mondays and Tuesdays at 09:55pm (KST) from March 28 to September 20, 2016 for 50 episodes.

In his youth, Lee Guk-cheol lost his wealthy family and his inheritance to his greedy uncle, Byun Il-jae. He lost everything and descended to the lowest echelons of society, from spoiled rich heir to lowly beggar almost overnight. However, an opportunity arises whereby he is able to obtain a new identity - Kang Gi-tan, allowing him to take back what is rightfully his and enact vengeance on those responsible for ruining his life. However, in his quest for revenge, he meets opposition in the form of Do Gun-woo, the illegitimate son of a chaebol chairman, and Oh Soo-yeon, a young woman who seem suspiciously similar to someone he developed feelings for in his youth.