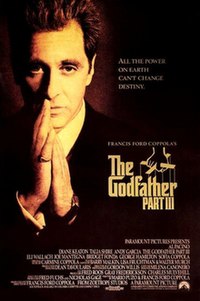 The Godfather Part III is a 1990 American crime film produced and directed by Francis Ford Coppola from the screenplay co-written with Mario Puzo. The film stars Al Pacino, Diane Keaton, Talia Shire, and Andy García, Eli Wallach, Joe Mantegna, Bridget Fonda, George Hamilton, and Sofia Coppola. It is the third and final installment in The Godfather trilogy. A sequel to The Godfather (1972) and The Godfather Part II (1974), it concludes the story of Michael Corleone, the patriarch of the Corleone family, who attempts to legitimize his criminal empire. The film also includes fictionalized accounts of two real-life events: the 1978 death of Pope John Paul I and the Papal banking scandal of 1981–82, both linked to Michael Corleone's business affairs.

In 1979, Michael Corleone is approaching 60. Wracked with guilt over his ruthless rise to power, especially for having ordered his brother Fredo's assassination, he donates millions to charitable causes. Michael and Kay are divorced; their children, Anthony and Mary, live with Kay. At the reception following a papal order induction ceremony in St. Patrick's Old Cathedral in Michael's honor, Anthony tells his father that he is leaving law school to become an opera singer. Kay supports his decision, but Michael wants Anthony to complete his law degree first; nevertheless, Michael agrees to let Anthony go his own way. Michael and Kay have an uneasy reunion when Kay reveals that she and Anthony know the truth about Fredo's death. Vincent Mancini, the illegitimate son of Michael’s long-dead brother Sonny, arrives at the reception. Michael’s sister Connie arranges for Vincent to settle a dispute with his rival Joey Zasa, but Zasa calls Vincent a bastard, and Vincent bites Zasa's ear. Michael, troubled by Vincent's fiery temper yet impressed by his loyalty, agrees to include Vincent in the family business.