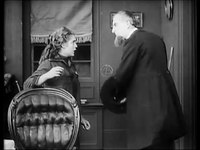 The New York Hat (1912) is a short silent film directed by D. W. Griffith from a screenplay by Anita Loos, and starring Mary Pickford, Lionel Barrymore, and Lillian Gish.

Mollie Goodhue leads a cheerless, impoverished life, largely because of her stern, miserly father. Mrs. Goodhue is mortally ill, but before dying, she gives the minister, Preacher Bolton, some money with which to buy her daughter the "finery" her father always forbade her.