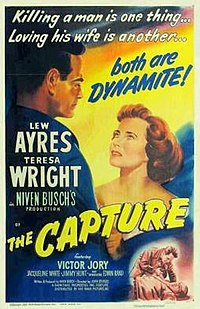 The Capture is a 1950 drama film directed by John Sturges, starring Lew Ayres, Teresa Wright, Victor Jory and Jacqueline White. Some film historians have categorized it as a noir.

Lin Vanner (Lew Ayres), is manager of an oil company. The payroll has been stolen in a hold-up. His fiance urges him to pursue the suspect in hope that he will gain recognition. Deducing the road the robber may have taken over the border with Mexico, he goes along to intercept him. He shoots a man who shouts back at him and does not raise his hands when challenged by Lin.