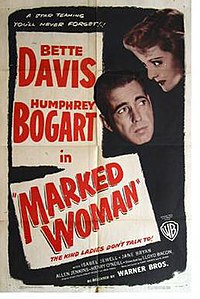 Marked Woman is a 1937 American dramatic crime film directed by Lloyd Bacon and starring Bette Davis and Humphrey Bogart, with featured performances by Lola Lane, Isabel Jewell, Rosalind Marquis, Mayo Methot, Jane Bryan, Eduardo Ciannelli and Allen Jenkins. Set in the underworld of Manhattan, Marked Woman tells the story of a woman who dares to stand up to one of the city's most powerful gangsters.

The notorious underworld czar Johnny Vanning becomes the owner of a gaudy New York night club and renames it Club Intimate. He exploits and mistreats the club's bar girls—Mary, Gabby, Emmy Lou, Florrie, and Estelle—in order to ensure their loyalty and obedience. As part of her job, Mary entices a man into betting and losing more money than he can afford. On the way home, he confides in her that he does not have the money to repay the gambling debt. He feels that it is all a game, but Mary warns him that he is in real danger and must leave town immediately. She is distressed, but not surprised, to learn soon after that the man has been murdered by two of Vanning's henchmen. District Attorney David Graham brings Vanning to trial, feeling that he has a strong case. Mary testifies against them, but Vanning has an airtight alibi concocted for them, and further damages her reputation, so the jury rules they were innocent. Graham believes that Mary lied to him, and she leaves fearing Vanning's retribution.