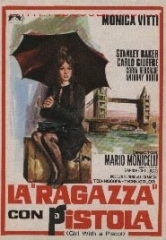 The Girl with the Pistol is a 1968 Italian comedy film directed by Mario Monicelli. It was nominated for the Academy Award for Best Foreign Language Film. Monica Vitti won the David di Donatello as Best Actress.

In a small village in Sicily, the girl Assunta is seduced by Vincenzo. The man, however, runs away the day after they become lovers. According to the local traditions Assunta and her sisters are unable to marry unless someone in the family kills the offender and restores the honor of the family. She leaves for England where Vincenzo has fled. Assunta finds herself intimidated by the different culture, but resolutely travels to Edinburgh, Sheffield, Bath, and London in search of Vincenzo in order to kill him. After an accident, Assunta is hospitalized; she meets a cute patient, understanding and sentimental, who advises her to forget about Vincenzo, and to devote herself to her life. She follows this advice, and soon she creates for herself a new and wonderful life in England.