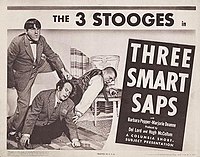 Three Smart Saps is a 1942 short subject directed by Jules White starring American slapstick comedy team The Three Stooges (Moe Howard, Larry Fine and Curly Howard). It is the 64th entry in the series released by Columbia Pictures starring the comedians, who released 190 shorts for the studio between 1934 and 1959.

The Stooges must get their future father-in-law (John Tyrrell) out of jail. Apparently, the father is a prison warden who has been overthrown and put behind bars by the local mafia. The Stooges manage to sneak into the prison, find the father-in-law to be, and start snapping as many incriminating photos of the mafia's party as possible. As a result, the real crooks are served justice, and the Stooges marry their sweethearts.