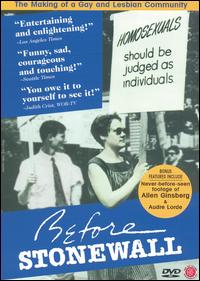 Before Stonewall: The Making of a Gay and Lesbian Community is a 1984 American documentary film about the LGBT community prior to the 1969 Stonewall riots. It was narrated by author Rita Mae Brown, directed by Greta Schiller, co-directed by Robert Rosenberg, and co-produced by John Scagliotti and Rosenberg, and Schiller. It premiered at the 1984 Toronto Festival of Festivals and was released in the United States on June 27, 1985. In 1999, producer Scagliotti directed a companion piece, After Stonewall. To celebrate the 30th anniversary of the Teddy Awards, the film has been selected to be shown at the 66th Berlin International Film Festival in February 2016.