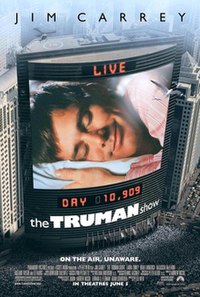 The Truman Show is a 1998 American psychological science fiction comedy-drama film directed by Peter Weir, produced by Scott Rudin, Andrew Niccol, Edward S. Feldman, and Adam Schroeder, and written by Niccol. The film stars Jim Carrey as Truman Burbank, a man who grew up living an ordinary life that—unbeknownst to him—takes place on a large set populated by actors for a television show about him. Eventually, he discovers the truth and decides to escape. Additional roles are performed by Laura Linney, Noah Emmerich, Natascha McElhone, Holland Taylor, Ed Harris, Paul Giamatti and Brian Delate.

Truman Burbank is the unsuspecting star of The Truman Show, a reality television program broadcast live around the clock worldwide. He has spent his entire life in the seaside town of Seahaven Island—in reality an enormous set visible from space—situated near Hollywood on Mount Lee and equipped with state-of-the-art technology to simulate day and night and weather conditions. There are 5,000 cameras to record Truman's every move, which have gradually grown in number and secrecy as he ages. The producers discourage Truman from leaving Seahaven by instilling in him aquaphobia through the "death" of his TV father in a boating "accident,” and by constantly broadcasting and printing messages of the dangers of traveling and the virtues of staying home. All of Seahaven's other residents, including his friends, his wife and his mother, are actors. Christof, the show's creator and executive producer, seeks to capture Truman's real emotion and human behavior and give audiences a relatable everyman.