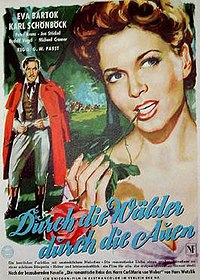 Through the Forests and Through the Trees is a 1956 West German historical comedy film directed by Georg Wilhelm Pabst and starring Eva Bartok, Peter Arens, and Joe Stöckel. It was Pabst's final film. The film's sets were designed by the art director Ludwig Reiber. It was shot at the Bavaria Studios in Munich and on location in Venice and Zwiesel. It was made in Eastmancolor.