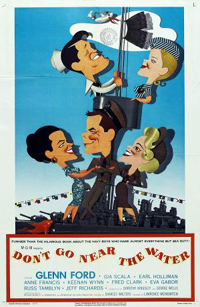 Don't Go Near the Water is a 1957 comedy film about a U.S. Navy public relations unit stationed on an island in the Pacific Ocean during World War II. It is an adaptation of the 1956 novel of the same name by William Brinkley. Glenn Ford and Gia Scala star. This is the first of several service comedies that Ford appeared in after the huge success of Teahouse of the August Moon. The movie was very successful and further solidified Ford's reputation as an adept comedic actor.

Lieutenant (j.g.) Max Siegel (Glenn Ford) and other US Navy personnel are stuck in a public relations unit far from the fighting. Lieutenant Commander Clinton T. Nash (Fred Clark), their commanding officer and a stockbroker in civilian life, refuses to allow anyone to transfer out. Much of Siegel's time is spent showing war correspondents (like obnoxious Gordon Ripwell (Keenan Wynn)) and visiting Congressmen around the island.