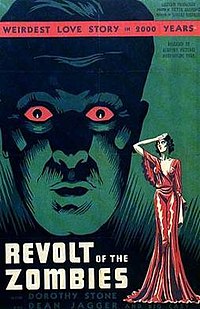 Revolt of the Zombies is a 1936 American horror film directed and produced by the Halperin Brothers which stars Dean Jagger and Dorothy Stone. It is one of the earliest zombie films. Although it was conceived as a loose sequel to Victor Halperin's moderately successful 1932 film White Zombie, when compared with Halperin's previous work, this film is generally regarded as a disappointment. Although he is not credited in the film, Bela Lugosi's eyes appear in Revolt of the Zombies whenever zombifying-powers are used; it is the same image of Lugosi's eyes used in the film White Zombie. Revolt of the Zombies is in the public domain, and can be copied or distributed without regard to copyright law.

On the Franco-Austrian Frontier during World War I, an Oriental priest, chaplain of a French colonial regiment, is condemned to life imprisonment because he possesses the power to turn men into zombies. In his prison cell, the priest prepares to burn a parchment containing the location of the secret formula. Gen. Mazovia (Roy D'Arcy) kills the priest and takes the partially burned parchment. After the war, an expedition of representatives from the Allied countries with colonial interests are sent to Cambodia to find and destroy forever the so-called "Secret of the Zombies". The group includes General Mazovia; a student of dead languages, Armand Louque (Dean Jagger); Englishman Clifford Grayson (Robert Noland); General Duval (George Cleveland); and his daughter Claire (Dorothy Stone).