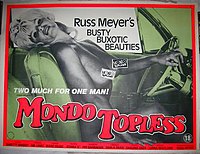 Mondo Topless is a 1966 pseudo-documentary directed by Russ Meyer, featuring Babette Bardot and Lorna Maitland among others. It was Meyer's first color film following a string of black and white "roughie nudies", including Faster, Pussycat! Kill! Kill! While a straightforward sexploitation film, the film owes some debt to the French New Wave and cinéma vérité traditions, and is known to some under the titles Mondo Girls and Mondo Top.

The film presents a snapshot of '60s San Francisco before shifting its focus to strippers. The strippers' lives are earnestly portrayed as they reveal the day-to-day realities of sex work, talk bra sizes, relate their preferences in men, all voiced over while dancing topless to a '60s instrumental rock soundtrack. Throughout a large portion of the film, the narrator talks about the women as if they are a subgenre of the counter culture movement, somewhat similar to the beatnik or hippie movements that were highly prevalent during the same era. The "Topless" movement as it is called by the narrator could also be perceived as an allegorical subset of the Sexual Revolution of the 1960s.