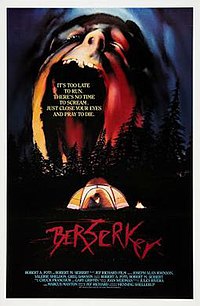 Berserker (also known as Berserker: The Nordic Curse) is a 1987 American slasher film written and directed by Jefferson Richard. The film centers on a group of campers who are stalked and murdered by a Viking berserker.

According to an old Nordic legend, a Berserker was a bloodthirsty warrior who ate human flesh, was forbidden a restful death and fated to be reincarnated in their blood kin. A summer camp accidentally stumbles across the Berserker legend when it arises in Rainbow Valley, an area settled by Norwegian immigrants. The camp is abuzz with rumours of a wild bear killing people in the area, including speculation about an old couple who get lost. But is it really a bear?