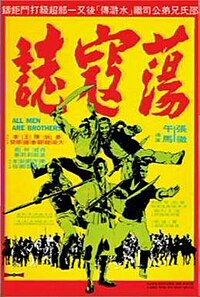 All Men Are Brothers, also known as Seven Soldiers of Kung Fu, is a 1975 Hong Kong wuxia film based on the Chinese classical 14th century novel Water Margin. The film was produced by the Shaw Brothers Studio and directed by Chang Cheh and Wu Ma.