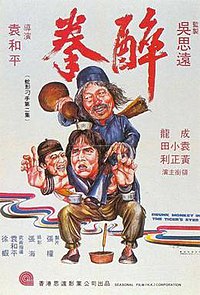 Drunken Master is a 1978 Hong Kong action comedy martial arts film directed by Yuen Woo-ping, and starring Jackie Chan, Yuen Siu-tien, and Hwang Jang-lee. The film was a success at the Hong Kong box office, earning two and a half times the amount of Yuen's and Chan's previous film, Snake in the Eagle's Shadow, which was also considered a successful film.

The plot centers on a young and mischievous Wong Fei-hung (sometimes dubbed as "Freddie Wong"). Wong runs into a series of troubles. Firstly, he teaches an overbearing assistant martial arts teacher a lesson. Next, he makes advances on a woman to impress his friends, and is soundly thrashed by her older female guardian as a result; his shame is compounded when these two are later revealed to be his visiting aunt and cousin, whom he had not met before. Lastly, he beats up a hooligan who is the son of an influential man in town. His father decides to punish him for his behavior by making him train harder in martial arts.