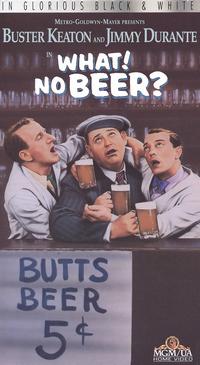 What - No Beer? is a 1933 Pre-Code comedy film released by Metro-Goldwyn-Mayer directed by Edward Sedgwick and starring Buster Keaton and Jimmy Durante. MGM had also paired Keaton and Durante as a comedy team during this period in The Passionate Plumber and Speak Easily.

Elmer J. Butts, taxidermist, goes to a dry rally, where he follows the beautiful Hortense and her gangster boyfriend Butch Laredo into the meeting hall. He sits by Hortense, only to be thrown out after the speaker asks if they want liquor back in this country, and he calls out "Yes!" The next day, Jimmy Potts, driving a car covered in pro-booze stickers, brings a fish to Elmer's shop for stuffing. It's Election Day, and there's a referendum on Prohibition on the ballot. Jimmy convinces Elmer to vote wet, and they go to the polls only to cause confusion and collapse the booths.