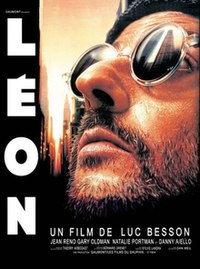 Léon: The Professional, titled Leon in the UK and Australia (and originally titled The Professional in the US), is a 1994 English-language French action-thriller film written and directed by Luc Besson. It stars Jean Reno, Gary Oldman, and Natalie Portman (in her film debut). The plot follows Léon (Reno), a professional hitman, who reluctantly takes in 12-year-old Mathilda (Portman), after her family is murdered by corrupted Drug Enforcement Administration agent Norman Stansfield (Oldman). Léon and Mathilda form an unusual relationship, as she becomes his protégée and learns the hitman's trade.

Léon is a hitman (or "cleaner", as he refers to himself) living a solitary life in New York City's Little Italy. His work comes from a mafioso named "Old Tony".