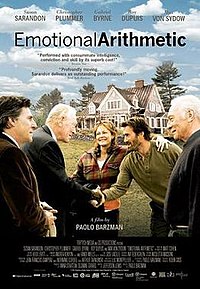 Emotional Arithmetic is a 2007 Canadian drama film directed by Paolo Barzman, based on the novel by Matt Cohen, about the emotional consequences for three Holocaust survivors when they are reunited decades later. The film stars Gabriel Byrne, Roy Dupuis, Christopher Plummer, Susan Sarandon, and Max von Sydow. It opened at the Toronto International Film Festival, in Toronto, Ontario, Canada, on September 15, 2007, and was released, in Canada, on April 18, 2008.

Emotional Arithmetic focuses primarily on three people who formed a bond in the Drancy internment camp, where they were imprisoned by the Nazis during World War II: Jakob Bronski (Sydow), who saw goodness in two orphaned children in the camp, Melanie (Sarandon) and Christopher (Byrne), and who helped them to survive. Decades after their release from Drancy, their emotional wounds still affect their lives in different ways when they meet again.