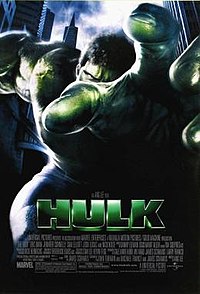 Hulk (also known as The Hulk) is a 2003 American superhero film based on the Marvel Comics character of the same name. It was directed by Ang Lee and written by James Schamus, Michael France, and John Turman, from a story by Schamus. Eric Bana stars as Bruce Banner / Hulk, alongside Jennifer Connelly, Sam Elliott, Josh Lucas, and Nick Nolte. The film explores the origins of Bruce Banner, who, after a lab accident involving gamma radiation, finds himself able to turn into a huge green-skinned creature whenever he is emotionally provoked or stressed, while he is pursued by the United States military and comes into conflict with his biological father, who has his own dark agenda for his son.

David Banner is a genetics researcher who experiments on himself, trying to improve human DNA. Once his wife gives birth to their son Bruce, David realizes his mutant DNA has been passed on and attempts to find a cure for his son's condition. The government, represented by Thaddeus "Thunderbolt" Ross, shuts down his research after learning of his dangerous experiments. David, in a fit of rage, causes a massive explosion of the facilities' gamma reactor, and accidentally kills his wife. He is then put into a mental hospital, while 4-year-old Bruce is sent into foster care and adopted, taking on the last name of Krenzler, believing his biological parents are deceased. The events leave Bruce unable to conjure the memories into reality.