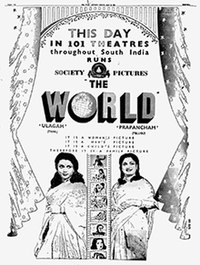 The story spans 3 generations. Sabapathy is an average person and he married beautiful Meena. Sabapathy gains wealth and status by luck. The couple have two sons – Shankar and Mohan. Shankar marries Padma as per his parents' wishes. Mohan is studying in a college. A girl student, Lalitha loves him, but he does not accept her. Lalitha goes abroad for Barrister studies. Leela is Mohan's cousin. She has returned from South Africa and is studying medicine. Mohan loves her. Leela is apprehensive at the beginning, but later on accepts his love. She becomes pregnant before marriage. Lalitha returns as a Barrister. She comes to know the love between Mohan and Leela. She tries several ways to separate them and get Mohan for herself. However, she fails in all her attempts and finally dies in a car accident. Leela's pregnancy is aborted due to shock. Mohan and Leela get married. Mohan goes to America for higher studies. In the meantime, Shankar and Padma beget two children – Chandar and Swarna. Padma dies when Chandar is 20 and Swarna is 16. Shankar wants to marry a poor girl Prema as his second wife. But Chandar opposes his father marrying a second time. Prema tries to commit suicide by jumping into the ocean. Chandar, without knowing that she is the girl his father intends to marry, rescues her and brings her for treatment to Leela, who has become a doctor now. Chandar's blood is transfused to Prema. Chandar falls in love with Prema. A police inspector Govindasamy comes for an inquiry and gets attracted by Prema's beauty. But Prema refuses him. He files a case against Prema for attempted suicide. Chandar does not want to live with his father. He stays with Leela. When Mohan returns from America, Govindasamy tries to poison his mind creating false stories about Chandar and Leela. Chandar is now forced to leave Leela's home also. He goes to Prema's house and comes to know that she is the one his father was to marry. So, he gets upset. The police inspector Govindasamy charges Chandar as the person who urged Prema to commit suicide. Govindasamy arrests Chandar and imprisons him.