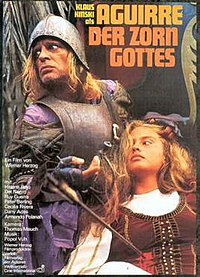 Aguirre, the Wrath of God (; ), known in the UK as Aguirre, Wrath of God, is a 1972 epic historical drama film produced, written and directed by Werner Herzog. Klaus Kinski stars in the title role. The soundtrack was composed and performed by West German kosmische band Popol Vuh. The story follows the travels of Spanish soldier Lope de Aguirre, who leads a group of conquistadores down the Amazon River in South America in search of the legendary city of gold, El Dorado.