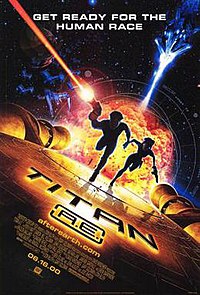 Titan A.E. is a 2000 American animated science fiction film directed by Don Bluth and Gary Goldman, and starring Matt Damon, Bill Pullman, John Leguizamo, Nathan Lane, Janeane Garofalo and Drew Barrymore. Its title refers to the spacecraft central to the plot with A.E. meaning "After Earth". The animation of the film combines 2D traditional hand-drawn animation with the extensive use of computer-generated imagery.

In 3028, a groundbreaking scientific project known as "The Titan Project" incurs the wrath of the Drej, a hostile race of aliens with bodies of pure energy, who fear that it will allow humans to challenge them. Determined to wipe out humanity, the Drej destroy Earth in a massive attack, forcing the surviving humans to evacuate and flee into space. During the evacuation of Earth, Professor Sam Tucker—head researcher on the Titan Project—leaves his young son Cale in the care of his alien friend Tek as he flees Earth in the spaceship Titan. Before he leaves, he gives Cale a gold ring, promising him that there will be hope for humanity as long as he wears it.