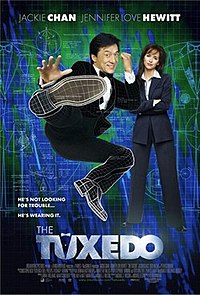 The Tuxedo is a 2002 American science fiction action comedy film directed by Kevin Donovan and starring Jackie Chan and Jennifer Love Hewitt. It is a spy parody that involves a special tuxedo that grants its wearer special abilities. It also involves a corporate terrorist, threatening to poison the United States' fresh water supply with bacteria that spills electrolytes into the blood and totally dehydrates the host.

James "Jimmy" Tong is a taxi driver notorious for his speed and ability to get his customers anywhere in the least amount of time. His reputation lands him a job as the personal chauffeur of the mysterious but wealthy Clark Devlin. Jimmy does not really know what his new boss' job is, but Devlin's friendly nature, imperturbable demeanor, and willingness to offer Jimmy advice wins Jimmy over and the two become friends. What Jimmy does not realize is that Devlin is a secret spy and undercover government agent, and when an attempt to kill Devlin with a car bombing sends him into a coma, Jimmy ends up with Devlin's recent case notes and a special watch that controls Devlin's rather unusual tuxedo.