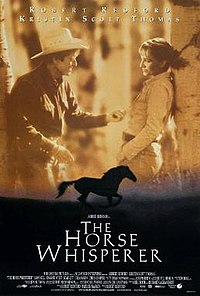 The Horse Whisperer is a 1998 American Western drama film directed by and starring Robert Redford, based on the 1995 novel The Horse Whisperer by Nicholas Evans. Redford plays the title role, a talented trainer with a remarkable gift for understanding horses, who is hired to help an injured teenager (played by Scarlett Johansson) and her horse back to health following a tragic accident.

In Lake Luzerne, New York, teenager Grace MacLean and her best friend Judith go out early one winter's morning to ride their horses, Pilgrim and Gulliver. As they ride up an icy slope, Gulliver slips and hits Pilgrim. Both horses fall, dragging the girls onto a road and get hit by a tractor-trailer. Judith and Gulliver are killed, while Grace and Pilgrim are both severely injured.