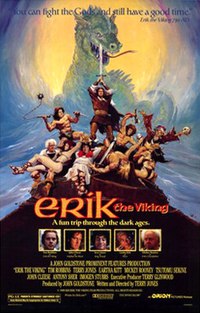 Erik the Viking is a 1989 British comedy-fantasy film written and directed by Terry Jones. The film was inspired by Jones's children's book The Saga of Erik the Viking (1983), but the plot is completely different. Jones also appears in the film as King Arnulf.

Erik, a young Viking, discovers that he has no taste for rape and pillage, and suffers guilt over the death of an innocent woman, Helga.