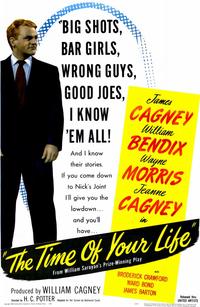 The Time of Your Life is a 1948 American comedy drama film directed by H. C. Potter and starring James Cagney, William Bendix, Wayne Morris and Jeanne Cagney. A Cagney Production, The Time of Your Life was produced by Cagney's brother William and adapted by Nathaniel Curtis from the 1939 William Saroyan play of the same name. Cinematography was by James Wong Howe.

The film follows the adventures of a group of regulars at Nick's 'Pacific Street Saloon, Restaurant and Entertainment Palace' in San Francisco. A sign outside tells people to come in as they are. At the center is the wealthy Joe (James Cagney), who has given up working to hold court at Nick's (William Bendix) bar. He desires to live "a civilized life" without hurting anyone and believes the real truth in people is found in their dreams of themselves, not the hard facts of their actual existence. Joe has a stooge named Tom (Wayne Morris), who runs his eccentric errands until a woman with a past named Kitty (Jeanne Cagney) comes in and steals Tom's heart. Also appearing are Broderick Crawford as Krupp, Ward Bond as McCarthy, Tom Powers as Blick, and James Barton as Kit Carson.