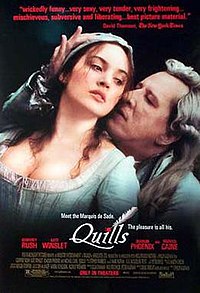 Quills is a 2000 period film directed by Philip Kaufman and adapted from the Obie award-winning 1995 play by Doug Wright, who also wrote the original screenplay. Inspired by the life and work of the Marquis de Sade, Quills re-imagines the last years of the Marquis's incarceration in the insane asylum at Charenton. It stars Geoffrey Rush as de Sade, Joaquin Phoenix as the Abbé du Coulmier, Michael Caine as Dr. Royer-Collard, and Kate Winslet as laundress Madeleine "Maddie" LeClerc.

Quills begins in Paris during the Reign of Terror, with the incarcerated Marquis de Sade penning a story about the libidinous Mademoiselle Renard, a ravishing young aristocrat who meets the imprisoned preeminent sadist.