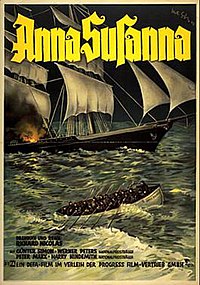 Anna Susanna is an East German drama film directed by Richard Nicolas. It was released in 1953.

During the Great Depression, a rich businessman named Brinkmann decides sink his ship, Anna Susanna, so he would be compensated by the insurance. He orders its captain, Kleiers, to sabotage it while at sea. When Kleiers carries out his instructions, several sailors and passengers notice him. In a fight that ensues, the captain is killed, but not before he manage to shipwreck Anna Susanna. Only a handful of people survive the incident. After they return home, they discover that Brinkmann's insurance fraud worked and he was compensated. They sue him at court and manage to have him indicted.