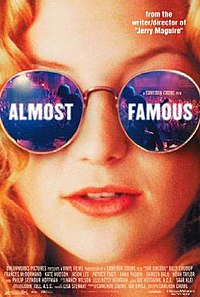 Almost Famous is a 2000 American comedy-drama film written and directed by Cameron Crowe and starring Billy Crudup, Frances McDormand, Kate Hudson, and Patrick Fugit. It tells the story of a teenage journalist writing for Rolling Stone in the early 1970s, his touring with the fictitious rock band Stillwater, and his efforts to get his first cover story published.

In 1969, child prodigy William Miller struggles to fit in. His life is further complicated after learning that his widowed college-professor mother Elaine has falsely led him to believe he is twelve years old. William is actually eleven, having started the first grade at five years old, and skipping fifth grade. Strong-willed Elaine's strict ban on rock music and pop culture influences that she fears have a negative effect on her children finally drives William's eighteen-year-old sister Anita to move to San Francisco and become a flight attendant.