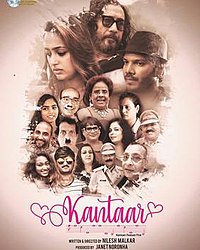 Kantaar is a 2019 Indian Konkani-language film written and directed by Nilesh Malkar and produced by Janet Noronha. It stars Jackie Shroff, Noel Sean and Ester Noronha. The film is about life in Goa, and finding purpose in life. After the award-winning Soul Curry, it is Malkar and Jackie's second Konkani film. The musical film features Lorna singing some jazz songs. It premiered at Ravindra Bhavan, Margao, on 28 January 2019.

Angie (Ester Noronha) is burdened with a sister, Sandy, who is a victim of kidney failure. Soon after, her father (Alfred Fernandes) dies unexpectedly, leaving Angie to take care of her mother (Liby Mendonca). Angie, burdened with sadness and helplessness, decides to commit suicide. However, she is stopped by Jordan Marcus (Jackie Shroff), a musician and part-time insurance agent.