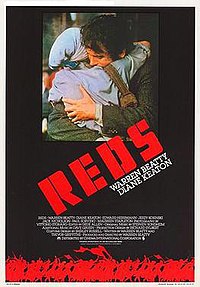 Reds is a 1981 American epic historical drama film, co-written, produced, and directed by Warren Beatty, about the life and career of John Reed, the journalist and writer who chronicled the Russian Revolution in his 1919 book Ten Days That Shook the World. Beatty stars in the lead role alongside Diane Keaton as Louise Bryant and Jack Nicholson as Eugene O'Neill.

In 1915, married socialite Louise Bryant encounters the radical journalist John Reed for the first time at a lecture in Portland, Oregon, and is intrigued with his idealism. After meeting him for an interview on international politics that lasts an entire night, she realizes that writing has been her only escape from her frustrated high-society existence. Inspired to leave her husband, Bryant joins Reed in Greenwich Village, New York City, and becomes acquainted with the local community of activists and artists, including anarchist and author Emma Goldman and the playwright Eugene O'Neill. Later, they move to Provincetown, Massachusetts, to concentrate on their writing, becoming involved in the local theatre scene. Through her writing, Bryant becomes a feminist and radical in her own right. Reed becomes involved in labor strikes with the "Reds" of the Communist Labor Party of America. Obsessed with changing the world, he grows restless and heads for St. Louis to cover the 1916 Democratic Convention.