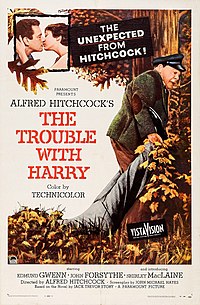 The Trouble with Harry 1955

The Trouble with Harry is a 1955 American Technicolor black comedy film directed by Alfred Hitchcock. The screenplay by John Michael Hayes was based on the 1950 novel by Jack Trevor Story. It starred Edmund Gwenn, John Forsythe, Mildred Natwick, Jerry Mathers and Shirley MacLaine in her film debut. The Trouble with Harry was released in the United States on September 30, 1955, then re-released in 1984 once the distribution rights had been acquired by Universal Pictures.

The quirky but down-to-earth residents of the small hamlet of Highwater, Vermont, are faced with the freshly dead body of Harry Worp (Philip Truex), which has inconveniently appeared on the hillside above the town. The problem of who the person is, who was responsible for his sudden death, and what should be done with the body is "the trouble with Harry."