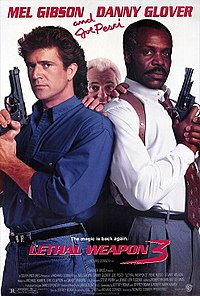 A week before his retirement, L.A.P.D. Sergeant Roger Murtaugh and his partner Martin Riggs are demoted to uniform duties after failing to defuse an office building bomb. While on street patrol they witness the theft of an armored car, and help to thwart the crime assisted by armored car driver Delores. One of the two thieves gets away, but the other is taken into police custody. The suspect is found to be a known associate of Jack Travis, a former LAPD lieutenant who is running an arms smuggling ring in Los Angeles. The department is further concerned that the thieves were using armor-piercing bullets. Riggs and Murtaugh are re-promoted and assigned to work with Sergeant Lorna Cole from internal affairs to track down Travis.