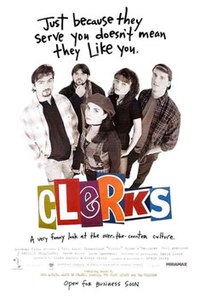 Clerks is a 1994 American independent black and white buddy comedy film written, directed, and co-produced by Kevin Smith. Starring Brian O'Halloran and Jeff Anderson, it presents a day in the lives of titular store clerks Dante Hicks (O'Halloran) and Randal Graves (Anderson), along with their acquaintances. Clerks is the first of Smith's View Askewniverse films, and introduces several recurring characters, notably Jay and Silent Bob (Jason Mewes and Smith).

Dante Hicks, a young man who works as a retail clerk at Quick Stop Groceries in Leonardo, New Jersey, is called into work on his day off to cover another employee's morning shift. Arriving at the store, he finds that the locks to the security shutters are jammed closed with chewing gum, so he hangs a sheet over them with a message written in shoe polish: "I ASSURE YOU; WE'RE OPEN!". Soon after opening, Dante's best friend, wisecracking slacker Randal Graves, arrives for his own workday at the video rental store next door.